Annual Music Festival Is Big Hit With Fans and USS 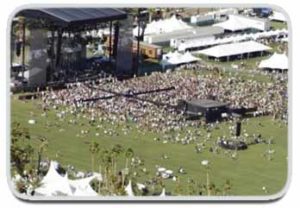 When 85,000 music fans descended upon the Empire Polo Club in Indio, California for the annual Coachella Music Festival, they were treated to some outstanding musical performances.

Coachella is held on three successive weekends in April. It is renowned for showcasing many popular and emerging acts in music, as well as legendary artists and reunion performances.

This year’s festival featured such artists as Snoop Dogg, Dr. Dre, Eminem, and Radiohead. On the third weekend for the country music portion of the festival (“Stagecoach”), Brad Paisley, Jason Aldean, Miranda Lambert and others took the stage.

The Coachella guests enjoyed their music without ever knowing that 13 days prior to the weekend concerts, a dedicated crew of 25-plus portable toilet rental associates from USS had arrived to begin preparing the site for the services that are necessary when staging a public event of this type.

USS provided more than 850 portable toilets. Additionally, hand washing stations and comfort stations were set up. The USS crew also installed 18 miles of temporary fencing to assist with crowd management and security. During the event, about 60 associates were needed.

“Managing a job this size is challenging,” said Jeff Dixon, Southwest Regional Operations Manager for USS. “There is a strict timeline for the delivery of our services as well as pickup after the festival.”

Dixon adds that when a large crew is required at a major event like Coachella, balancing the day-to-day resources of USS can require some creative juggling to ensure that all customers receive quality service. USS first provided services for Coachella in 2005 when it was awarded a contract to provide the temporary fencing that year. The business relationship with this customer has continued to grow. In 2007, USS was contracted to provide portable toilets as well as fencing. This marks the seventh year that USS has provided services for the event.

“Coachella/Stagecoach has become a major revenue opportunity for USS,” said Mark Bartholomew, Senior Vice President of Operations at USS. “It is listed as the largest music festival in the U.S. and fifth largest in the world. Due to this fact, USS has positioned itself as the only site services company large enough to manage every aspect of the event.”

Based on the rave reviews that the USS regional office received after the event, it appears that Coachella and USS will be performing together for many years to come. In fact, USS just inked a three year contract extension with Coachella.