Follow the USS response to the developing COVID-19/Coronavirus situation 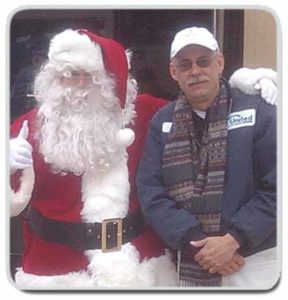 When Santa Claus needed a little help gathering presents this year, he knew who to turn to for help – USS Associates.

The San Jose, Benicia, and Santa Rosa, California offices recently joined forces to collect toys for the Sonoma Raceway Charities. All in all, USS Associates donated 663 toys to the annual toy drive.

“USS has a variety of race track customers from across the country,” said Roxann Briscoe, Human Resources Generalist at the San Jose office. “So supporting their efforts seemed a logical partnership for us.”

Each year, Sonoma Raceway hosts a holiday Christmas party at the racetrack for hundreds of needy children in the area. This year’s party was held on December 15 with more than 230 Sonoma Valley children and their families at the event. The children were treated to caroling, refreshments, a car display, balloon animals, and a visit from Santa – who presented each child with a bag full of toys. The children ranged in age from newborn to 12-years-old.

This is the third year that USS Associates participated in the toy drive, and it was by far the most successful one to date. The number of toys donated tripled from the previous year.

To make the USS toy drive fun, Associates at each participating branch were divided into six teams. Briscoe says that teams had a friendly competition over which team could donate the most toys.

The Pink Team (Yard, Shop and P&D) had the most toys by the deadline of Friday, December 7. However, the contest was extended until Monday, December 10 so that those who forgot, or anyone that wanted to bring in additional gifts, would have extra time to do so. Team Green (Sales, HR and Billing/Posting) won on Monday with the most toys because of the time extension. But in the spirit of the toy drive, both the Green and Pink teams were winners.

Whether they were on the “winning” team or not, all Associates from the participating offices embraced this charity event with open arms and wallets. “Children touch people in so many ways,” said Briscoe. “I knew that our Associates would get behind this toy drive and support it wholeheartedly.”