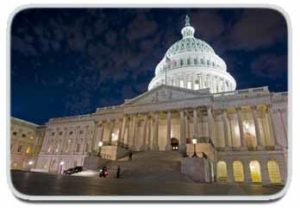 Every four years, the United States exercises one of the most important activities in the country’s history – electing a president.

USS became involved in this process when the company was chosen to provide five luxury restroom trailers, 100 portable toilets, and air misters for the recent Republican National Convention (RNC). Additionally, USS was contracted to pump waste from 400 shuttle buses that drove convention guests to and from various venues.

Held in Tampa, Florida in August, the 2012 Republic National Convention hosted top name politicians and celebrities. It is estimated that more than 50,000 people attended the three-day event.

“Providing service for this event was particularly challenging,” said Barry Miller, Regional Vice President for USS. “Prior to the convention, USS associates from the Tampa office had to undergo background security checks in order to be allowed on the convention site.”

The equipment that USS provided during the convention was used by the U.S. Secret Service, CNN, and by convention guests attending a private fundraising party.

“During the convention, USS associates faced additional obstacles navigating our equipment through security areas and delivering them to specified locations,” added Miller. “Despite the added security issues, our team performed great.”

Because of USS’s excellent service at the RNC, the company has been selected to provide services for one of the presidential debates between Governor Romney and President Obama. The debate is scheduled for October 22 at Lynn University in Boca Raton, Florida. USS will be providing four luxury restroom trailers and 2,000 feet of temporary fencing for this event.