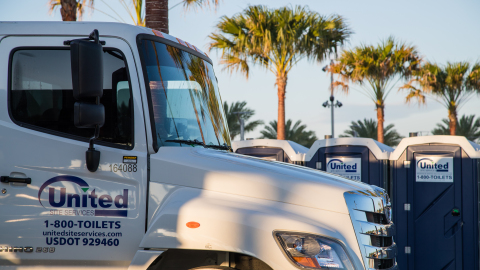 “Under Ron’s leadership as CEO, USS achieved remarkable growth and is well positioned to take the next step”

Mr. Satrazemis succeeds Ron Carapezzi, who has served as President and CEO since 2009. Mr. Carapezzi will transition into the role of Chairman and is expected to remain a meaningful equity partner in the business.

United Site Services was acquired by Platinum Equity in August 2017.

“Under Ron’s leadership as CEO, USS achieved remarkable growth and is well positioned to take the next step,” said Platinum Equity partner Louis Samson. “We thank Ron for his contributions and are pleased the business will benefit from his continued support and partnership.”

Most recently, Mr. Satrazemis and Mr. Jamroz held the CEO and CFO roles, respectively, at BlueLine Rental. BlueLine was the fourth largest general equipment rental provider in North America. The two executives led a turnaround of BlueLine under Platinum Equity’s ownership that resulted in the $2.1 billion sale of the business to United Rentals in the fourth quarter of 2018.

“Since we acquired USS, the business has proven to be a strong platform for growth, both organically and through M&A, with significant untapped potential ahead,” said Mr. Samson. “Asterios is the perfect fit to drive the next phase of the company’s evolution. As we saw first-hand with the success of BlueLine, he’s an outstanding leader and a terrific partner. We are excited to work with him again.”

Mr. Satrazemis brings a depth of experience in the rental industry to USS, not just in the general equipment space, but in the specialty sector as well. Prior to serving as CEO of BlueLine, Satrazemis was President of the Americas for Aggreko, a leader in temporary power and temperature control solutions.

“No other site services provider has the legacy and reach of USS,” said Mr. Satrazemis. “I’m excited for the opportunity to lead the team in expanding our position as the leading player in the market while continuing to deliver a best-in-class experience for our customers.”

Mr. Carapezzi said he’s grateful for the experience he’s had and excited about the company’s future.

“I feel fortunate for the opportunity I had to lead USS over the past decade as it grew into a market leader in portable sanitation,” said Mr. Carapezzi. “I have the utmost confidence that we are well positioned for the next phase of growth led by Asterios and the leadership team.”

United Site Services, a Platinum Equity company based in Westborough, Massachusetts, is the nation’s leader in the portable toilet and temporary fence rental services. It boasts the nation’s largest fleet of portable sanitation equipment and has over 100 locations across the country. Learn more at www.unitedsiteservices.com

Founded in 1995 by Tom Gores, Platinum Equity is a global investment firm with approximately $13 billion of assets under management and a portfolio of approximately 40 operating companies that serve customers around the world. The firm is currently investing from Platinum Equity Capital Partners IV, a $6.5 billion global buyout fund, and Platinum Equity Small Cap Fund, a $1.5 billion buyout fund focused on investment opportunities in the lower middle market. Platinum Equity specializes in mergers, acquisitions and operations – a trademarked strategy it calls M&A&O® – acquiring and operating companies in a broad range of business markets, including manufacturing, distribution, transportation and logistics, equipment rental, metals services, media and entertainment, technology, telecommunications and other industries. Over the past 23 years Platinum Equity has completed more than 250 acquisitions.