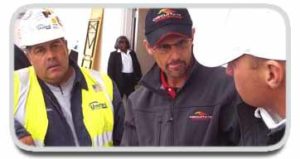 On November 16-18, USS’s South Central team had the honor of supporting the first ever Formula One Race held in the United States in Austin, Texas.

The Buda, Texas office and surrounding teams placed more than 1,200 DXRs portable toilet rentals, 25 comfort stations-handwashing sinks, and more than 100 holding tanks at the race. USS also put up more than two miles of panel and in-ground fencing for the event.

Steve Black, Regional Vice President for South Central, said, “Since this was a first time event, the plan developed from day to day. We had curve balls thrown at us daily. But our team did an outstanding job!”

Circuit of the Americas (COTA) was the organization that brought Formula One racing to the United States. To make that happen, COTA turned a tract of land that was formerly the home of rabbits and rattlesnakes into a state-of-the-art racetrack that can house more than 100,000 spectators per event. At this new 3.4 mile racing circuit, fans will enjoy some of the world’s fastest and most technologically advanced cars as they race for glory. 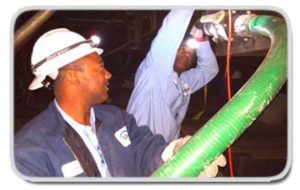 The track was an improbable project that had drawn skepticism since it was announced in May 2010. Many people said it would never happen. Too ambitious. Too expensive. Too little time. Too unlike Austin. For almost two years, the project bumped and lurched through doubts and delays. On at least two occasions, organizers say, the project was a heartbeat away from failure. And yet, against all odds, the track was built, and both the design and workmanship have been drawing rave reviews. With this event, Austin, Texas joined 19 other cities such as Monaco, Shanghai and Sao Paolo in hosting the exclusive international racing circuit that is Formula One.

“I’m incredibly proud of how the collective group functioned as a team for this event. Jason Hamer, Elizabeth Koehler, and Annria Berry were key in landing this portable sanitation contract. Hamer also helped organize the crew for comfort stations and attendants. Our Buda team kept us on time with the portable toilet rental placement – and the constant changes to the map. Sal Reyes led the fence rental crew – and never lost his cool – even when the plans changed up until the event time. Tim Zais led the team effort on disposal and frac tank system. This was a true team effort,” added Black.

USS’s expertise in providing services at large racing events is well-known. Along with the Formula One event, the company has provided services at Daytona International Speedway, Darlington Raceway, Texas Motor Speedway, and many others.